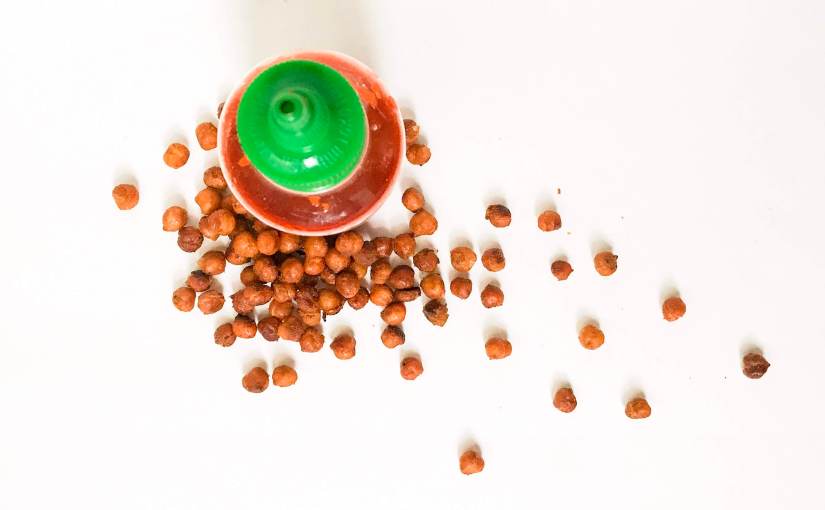 For those of you who don’t quite know the personal significance of this recipe, allow me to enlighten you. I don’t hate many things, especially when it comes to eating. However, one major exception has existed for as long as I can remember. I HATE spicy food. It’s not just a preference, not a loose stance from which I’ll stray on occasion. It’s an “I”ll take a level 0 pad thai please” even when the server laughs at me; an always wary of getting too heavy handed with the pepper shaker; a “mom, try this before I do because it smells hot” kind of hate. Spice and I do not see eye to eye, and we never have. The Avengers : Thanos :: Allie : Spicy Food. I think you get it.

Alas, perhaps now–after you’ve had your laugh at my wimpiness– you can grasp the absurdity of this post. I, Allie Durand, used Sriracha in something I made. That I consumed. With my own mouth.  And I lived to tell the tale. In fact, I ate all of the chickpeas that I made for this recipe, and–this is the part that still doesn’t like to be heard–I liked them. 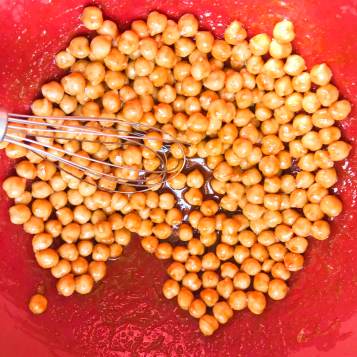 I certainly didn’t plan for the sole nemesis of my culinary life (aside from coffee, which I’ve already endured once on this blog) to become the center of my recipe. I had a much sweeter, much less frightening, much more me-friendly concoction prepared; but I ran out of time to get it done for this post. My next plan soon became to roast chickpeas, a favorite snack of mine and one that I’d kept on my mental back-burner in case of a pinch for time such as that. But it wasn’t until I opened the spice cabinet and found I was out of my beloved cumin (a fabulously delicious and heat-free spice), that I, with shaking hands, opened the fridge and took out the very bottle I’d nearly pawned off to a friend two days before.

Yet here we are. You’re reading my Sriracha recipe, the recipe I wrote having consumed dozens of the fiery snacks. Everyone survived (sans chickpeas), and I’m proud of myself for stepping beyond the bounds of comfortable food. Though an arguably trivial example, this ordeal really brought to mind my struggle with boldness. Though I am undoubtedly an extrovert, someone who loves attention, and a sucker for a good counter-cultural act, there’s a sense of timidity in me that loves to tighten its grip on my interactions, especially as I get older.

Maybe it’s a result of simple evolution in my personality; maybe it’s the fear of being condemned the way so many people are for expressing anything unpopular about themselves; maybe it’s the fact that I’ve spent my life in ballet studios, where you do exactly what you’re supposed to do and look exactly the way you’re supposed to look and fix yourself when you don’t do exactly what you’re supposed to do and speak exactly zero times. All I know is that starting conversations with strangers and stating my opinion confidently and simply being as “me” as it gets comes with a small twinge of apprehension that used to be nonexistent.

I’m not saying that I’d be better off as my elementary school self–a gal with a lot of opinions, not much of a verbal filter, and an overwhelming notion that everyone around her needed to know that–she’s left in the past for a reason. But, I am saddened by the fact that I no longer feel that childhood ease of unapologetic being. Speaking. I may have been naive as a child; let’s rephrase: I WAS naive as a child, but maybe being naive isn’t the worst thing if it erases the fear of being judged, hated, seen as inferior.

But here’s where the chickpeas come in. I know that despite what events in my life have worked to suppress the carefree, loud-mouthed gal in me, I ultimately get to choose every day to fight them. To approach a stranger on the bus and begin conversation because why not. To talk about how freaking amazing God is when the world tells me I should keep it to myself. To be myself always and around everyone, no matter how much more intelligent, attractive, witty, or popular than me I’m convinced they are.

Friends, life can be heavy. It can be scary and uncomfortable and downright hurtful. Let’s do each other a favor and support the daunting practice of boldness. Let’s get a little spicy.

For the Spirit God gave us does not make us timid, but gives us power, love and self-discipline.

This is just one flavor option out of the endless possibilities for roasted chickpeas, a delicious and sinfully easy snack. This recipe, though, is especially tasty for lovers of Sriracha and spice in general!